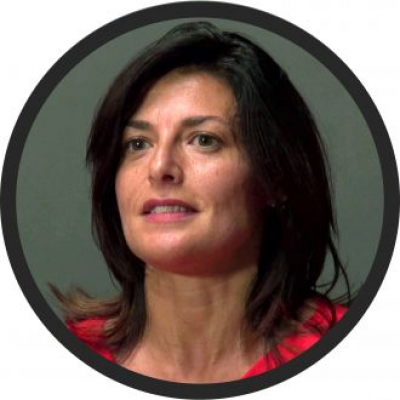 As part of its event series tgiFHI, the Franklin Humanities Institute is conducting interviews with its faculty speakers in order to familiarize broader audiences with the diversity of research approaches in the humanities, arts, and interpretive social sciences at Duke University.

In this edited and condensed interview with Dr. Luciana Parisi, Professor of Literature, she describes how she become interested in cyberpunk, the role of bacteria in human evolution, and whether technology is good, bad - or both.

Dr. Parisi will give a virtual tgiFHI talk titled Recursive Colonialism and Speculative Computation on Friday, September 18, 2020, at 9:30am. Consider joining us!

On her research interests and how they developed

So my research interests are philosophy of media and technology, philosophies of difference and critical theories, computation and cybernetics.

I started to get interested in information science and cybernetics when I started reading science fiction literature from this movement called cyberpunk in the late 1980s. Cyberpunk was really what got me into critical theories of technology and into pursuing my doctoral studies with the Cybernetic Culture Research Unit at Warwick University in the late 90s.

On one hand, you have this question of technology as a new form of capital, control and governance, one that’s invasive and transforms all forms of being and knowing, that impacts our ontology and our epistemology. But it also was a way to break away from essentialism and forms of naturalism that were being adopted in certain politics of identity, especially feminism.

My first book, Abstract Sex: Philosophy, Bio-Technology and the Mutations of Desire, was part of this endeavor - of breaking away from the Darwinian epistemology of the evolution of the species, which is based on sex and gender identification. I looked at a different mode of evolution that was defined by symbiosis or endosymbiosis, where all kinds of biological systems really are descendants of bacteria, and the way bacteria transmit information and retrieve information is not within the boundary of species.

It was a kind of rewriting of history - from the ancient origin of the human to biotechnology, and then taking biotechnology as a possibility to rewrite that sex-gender identification and politics.

On how science and the humanities intersect in her research

Science is believed not to be really a way to create philosophical concepts, or new aesthetics; it’s something that has to do with measuring the world in exact methods. Scientific knowledge is ontic, or limited to facts. And science itself is locked within this epistemological form; it can't go beyond itself. My scope is to try and open science to its own limits.

My method is always to go into science, stay with science, try to break down the questions that I need to ask, and then go back to the humanities, and ask the humanities a critical question:

Is it true that we still need to think about the human-machine division, and what does it mean to be human if we suspend the model of speciation?

When you know your question of the human is based on a colonial epistemology, a patriarchal epistemology, why are we hanging onto it? This is the epistemology that we've been carrying on since modernity and it's been consolidated by Darwinism. A certain reading of “the fittest” that capital understands as: you're not competitive enough, you're not fit enough, and it's your fault that you're poor. Instead going back to Western colonial epistemology, challenge it and allow for other forms of knowledge to come forward.

I think I really like Sylvia Wynter's proposition on this, where she says we need to expand our inquiry and scientific epistemology to change our cognitive understanding of the world. That's very, very dear to me, this method. That’s why I work at the intersection of the humanities and science, because going back and forth allows for modes of interrogations that can abolish colonial and patriarchal forms of knowledge.

On what she hopes people will take away from her talk

On one hand, forms of governance are totally relying on science, but then on the other, forms of ontological and epistemological liberation can also be articulated from science. So it's important to take that from science, rather than associate it with something that only wants to technocratically divide and control us. In my book Contagious Architecture, I propose an alternative conceptualization of algorithms and data, and engage with computation as a new form of thinking space and time.

My work has always tried to create a space away from the opposition between “technology's good” and “technology's bad.” Is it about power, or is it about resistance? Is it trying to articulate a different kind of ontology and epistemology? That's where my research led me from cyberpunk and cyberfeminism into a political re-articulation of sex.

I think the question of the limit is very important. So what we will really look at in this talk is to say that the limits of knowledge are neither something to be completely overcome - because, you know, we have this vision that we will incorporate everything – or to say, “oh, there's something that we really don't know, and we will never know.” No, it's about experimenting with the limits of knowledge, as a way to transform knowledge.

On the courses she’s teaching

When I arrived here last year, I started a graduate seminar called “Automation and Philosophy” about the debate about machines taking over our decision-making capacity, which is fundamental to construct philosophy.

My undergraduate course this semester is called “Societies of Control: Power and Resistance in the 21st Century,” about how emergence of intelligent technology - technology that is able to predict your behavior and recognize your patterns when you walk in the street or when you pass a border, or when you buy something on Amazon - is transforming modes of governance and therefore needs new forms of resistance.

Next term is a class about Computational Architecture: Space, Time and Borders. So I will look at planetary architecture - the infrastructure of computation and artificial intelligent systems, such as drones, as transforming borders into war zones– and we will look at how this kind of automated infrastructure of intelligent prediction and tracking is establishing new invisible borders where space and time can become hacked and reprogrammed.