Crimes of Art and Terror 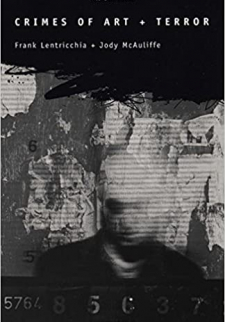 Do killers, artists, and terrorists need one another? In Crimes of Art and Terror, Frank Lentricchia and Jody McAuliffe explore the disturbing adjacency of literary creativity to violence and even political terror. Lentricchia and McAuliffe begin by anchoring their penetrating discussions in the events of 9/11 and the scandal provoked by composer Karlheinz Stockhausen's reference to the destruction of the World Trade Center as a great work of art, and they go on to show how political extremism and avant-garde artistic movements have fed upon each other for at least two centuries.

Crimes of Art and Terror reveals how the desire beneath many romantic literary visions is that of a terrifying awakening that would undo the West's economic and cultural order. This is also the desire, of course, of what is called terrorism. As the authority of writers and artists recedes, it is criminals and terrorists, Lentricchia and McAuliffe suggest, who inherit this romantic, destructive tradition. Moving freely between the realms of high and popular culture, and fictional and actual criminals, the authors describe a web of impulses that catches an unnerving spirit.

Lentricchia and McAuliffe's unorthodox approach pairs Dostoevsky's Crime and Punishment with Martin Scorsese's King of Comedy and connects the real-life Unabomber to the surrealist Joseph Cornell and to the hero of Bret Easton Ellis's bestselling novel American Psycho. They evoke a desperate culture of art through thematic dialogues among authors and filmmakers as varied as Don DeLillo, Joseph Conrad, Francis Ford Coppola, Jean Genet, Frederick Douglass, Hermann Melville, and J. M. Synge, among others. And they conclude provocatively with an imagined conversation between Heinrich von Kleist and Mohamed Atta. The result is a brilliant and unflinching reckoning with the perilous proximity of the impulse to create transgressive art and the impulse to commit violence.